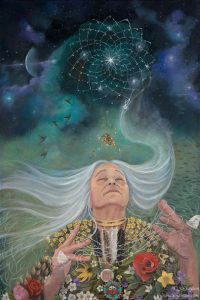 Back in March of this past year , when we were moving into our first lockdown,…I wrote a blog called

“The Time of Kali – How we are transitioning from the ending to a new beginning. “

This blog was a continuation of the original piece I wrote in 2017, called  “In the Time of Kali” http://www.jojayson.com/time-kali-riding-winds-change/

where I spoke of …

“times of great upheaval, chaos, discord and big change. Big change rarely comes without disruption to the status quo and a slow death of something that used to exist, to make way for a new beginning…..a new way.” © Jo Jayson 2017

I explained the energy called Kali-Ma…

“the energy of Kali-Ma, a feminine destructive and often terrifying force of creation that destroys all that needs to end, and clears the way for the creation of a new beginning”

And I talked about a new paradigm being birthed ..

“One based and grounded in compassion, cooperation, empathy and justice for all. There is a new voice being heard, a rising of the feminine aspect in all humanity – not just women – and a yearning for those forgotten and struggling to be seen and heard.” © Jo Jayson 2017

Since I wrote those words, we have indeed seen much upheaval and an uprising of humanity against a toxic system embedded in greed, power and deep corruption. We have witnessed clashes of idiology and values, and hatred and fear spew up and show its ugly face, We have seen the light fall on systemic racism and chronic inequality and we have experienced a deadly global pandemic that turned our worlds upside down and disrupted our way of life in ways we could never imagine.  As I wrote, our hearts have indeed been forced to burst open with compassion and empathy.

“What also is being asked of us all, is to live in a state of balance, integrity, and honesty. Whatever is not serving the whole is being unraveled to make way for an era of transparency, personal and collective power and cooperation, instead of secrecy, competition, greed and power only at the top. This storm we are in, personally and globally,  is marking the end of the old ways of being. It marks the end of division and establishes the beginnings of inclusion, togetherness and wholeness.” © Jo Jayson 2017

In March I said that

“the old is dying, and by the end of this year, we will see a lot gone, of what no longer serves this new way life.”

Compassion for others is bursting out of our hearts and true leaders are shining with compassion and understanding. Those that are still in the old ways of greed and selfishness, corruption and fear, will take their leave of this universal stage. There is an amazing healing happening right now.” © Jo Jayson March 2020

As we enter into the threshold of this new year and new decade, as with any hurricane or storm, there is much clean up to do. The first part of this new year I feel there will be enormous focus and efforts to clean up from the chaos and damage of the last administration in the US and the ripple effects of this around the world will take place with systems and current administrations crumbling in other countries in the coming years.. A new way, a new beginning will be seeded as predicted. As we move through the healing of this country and the world and vaccines and treatments will keep rolling out, our lives will start to open up again and a new and fuller version of life by the end of summer into the fall . But we will be changed. A new way  is already emerging. The balance of the scales will be a huge theme this new year and into the next four.  Healing occurs when justice is allowed and harmony blooms from this balance.

This new year, begs us to become the new you….the new us, the new we, and the new collective. I wrote that…

“There is a great light in front of us, and it will arrive sooner, the more we all can come back to ourselves, our families, our loved ones, our health and wellbeing, nature, and true harmonious cooperation with our fellow man. People will reject anything that does not comply with this new way, and we will see The People, as citizens of the earth, rise up and be their own leaders of change.”  © Jo Jayson March 2020

In June , we did indeed see the world rise up in outrage of the murder of George Floyd and the Black Lives Matter movement found its voice and was heard.

Come February, we wll be very much through the threshold and stepping into this new age. Some , although not all astrologers, talk of this being the beginning of the Age of Aquarius…one where humanity recognizes and awakens to the concept that we are all one. Whether it is the New Age of Aquarius or simply a shift into a new era,  our collective consciousness is to be focused on the whole, on all of us in unity and in cooperation with each other. The time of greedy individualization is very much over….and those that cling on to the old ways will struggle to find their voices heard in the coming years.

All  grasps of power in this first month of the new year, will I feel, fall on deaf ears. People have been outraged, found their voices, become empowered and led by compassion,  all growing towards this new beginning.

If you are interested in learning more about this time of Kali and this new beginning that has finally arrived, please join me for a teleclass on January 21st  8-9.30pm where we will continue the conversation about what I spoke of in the spring teleclass on this subject. There will be a meditation at the end of the discussion to open up and align to this beautiful beginning for us all.

A Sunday Thought Weaving The Web with Gratitude
Scroll to top