For many of us around the world, these are times of great upheaval, chaos, discord and big change. Big change rarely comes without disruption to the status quo and a slow death of something that used to exist, to make way for a new beginning…..a new way.

This is the Time of Kali…

It’s almost two years ago that I painted Kali, and at the same time in a universally synchronized confirmation of my own intuitions, Kali-Ma’s image was projected onto the facade of the Empire States Building here in New York. Whoever decided to do that was clearly also very intuitive because since that point we have seen huge unforeseen changes, chaos and instability in our political world here and abroad and great division and tension amongst people. Kali-Ma , the revered Hindu Goddess, represents the energy of pure creation. Within this energy of creation comes destruction, darkness and the breaking down of the old. For some this is why Kali energy is often feared….but in truth, out of the darkness and destruction of the breakdown of what is, lies the powerful and nurturing aspects of rebirth and a new creation.

All of us are witnessing this outside of ourselves, and many our experiencing these changes personally in their own lives. Many relationships are coming to an end, lives are being turned upside down and many are going through transformations with the big storms of change passing through. What is happening now personally, politically, socially and globally,  is the destruction of the old paradigm. The old world order is being forced to break down and is grasping on to power with its last furious breath, whilst the many step up to resist and create a new vision for the future.  A new paradigm is being birthed. One based and grounded in compassion, cooperation, empathy and justice for all. There is a new voice being heard, a rising of the feminine aspect in all humanity – not just women – and a yearning for those forgotten and struggling to be seen and heard. 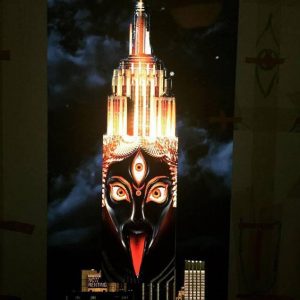 Kali on the facade of the Empire State Building Aug 2015

What also is being asked of us all, is to live in a state of  balance, integrity, and honesty. Whatever is not serving the whole is being unraveled to make way for an era of transparency, personal and collective power and cooperation, instead of secrecy, competition, greed and power only at the top. This storm we are in, personally and globally,  is marking the end of the old ways of being. It marks the end of division and establishes the beginnings of inclusion, togetherness and wholeness.

However , what we are seeing now is much like a fly acts before it dies. There is a last frantic crazy hold onto power from the outgoing old ways and it feels like we are going backwards from bad to worse. None of us know how long that last dying breath will last,  yet through all of this we try to find some balance within the ongoing turbulent news and crazy-making social media.We are asked to surrender into the vibration of love and compassion. This alone will dissolve the fear brought up by the chaos of the unknown and will help us all ride the waves of change. Each time we are confronted with something that outrages us and relentless injustices that break our hearts, we are called to pour forth even more love, even more compassion to those who are still stuck in the dark and holding on to the old ways that do not serve us anymore. We are expected to counter this with daily acts of love and empathy and to stand up for those less fortunate than ourselves. We are expected to demand of ourselves and others, only the highest acts of honesty and goodwill. We are expected to be the ‘goodness’ we want to witness in our worlds. If we can do this, love will always triumph. It is the time to be your own hero, to be your own authority and to rise up with love, not hate. It is time to create the changes you want to see in your own lives and stop looking to others to have power over you. If we can do this we can ride through the eye of the hurricane and be protected when we land on the shores of a new beginning.

Self-Care within Self-Love
Weaving The Web with Gratitude
Enoughness
The New Beginning – In the Time of Kali part 3
The Time of Kali – How we are transitioning from the ending to a new beginning – Part 2
In The Time of Kali : Riding the Winds of Change – Part 1
A Sunday Thought
12 replies